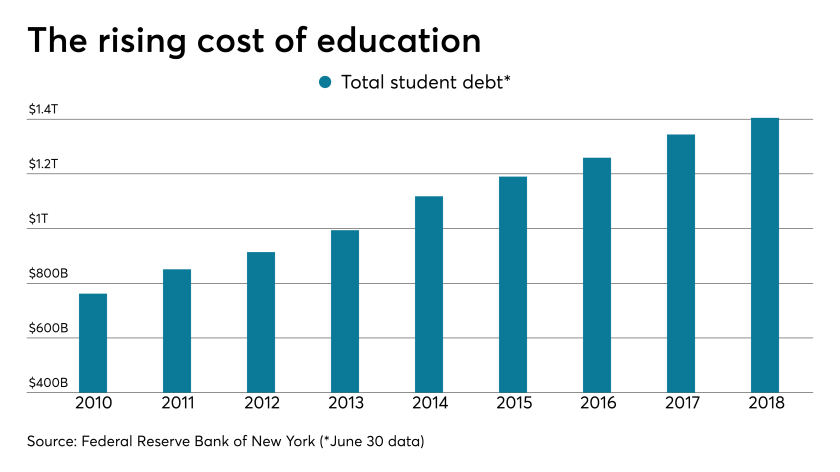 Advisers Struggle with Student Loan Debt, too. Here's How One Firm Is Helping. . .

A Connecticut RIA has launched an innovative incentive program to help its young advisers pay down their student loans.

Barnum Financial Group will contribute monthly payments of $100 to $200 over a three-year period to beginning advisers who meet certain performance metrics. Administered by SoFi, the program’s aim is to pay down the principal of the young advisers’ student loan debt.

The debt reduction program, which began last month, was the result of a brainstorming session at Barnum following a discussion about the crushing student loans facing many college graduates, says CEO Paul Blanco. Over half of Barnum’s advisers are recruited straight out of college, Blanco says.

In addition to the widely publicized national statistics about the student debt crisis, Barnum executives could see anecdotal evidence in its own workforce.

“We saw what happened when young advisers went out to see their friends to begin building their practice,” Blanco says. “Their friends were now living in the city but couldn’t afford basic planning services because they couldn’t set money aside after paying their student loans. We realized our advisers fit the same profile and had the same needs.”

Barnum is the first financial advisory firm to participate in the “SoFi at Work” student debt reduction program, according to Jennifer Nuckles, head of partnerships and content at SoFi.

Matt Nelson, who joined Barnum as a financial services representative just this week, enthusiastically endorsed the program. Nelson graduated from Elon University in North Carolina in May with $20,000 in student loan debt, which was beginning to accrue interest.

The youngest in a family of four from Worcester, Massachusetts, Nelson had already seen how much pressure such debt had put on his older sisters. “I hope to start a family one day and thinking about balancing paying off the loan with everything else can be pretty overwhelming,” he says. “The sooner I can pay off the debt the better.”

The structure of the program “adds another incentive to generate production,” Nelson adds. What’s more, enabling a novice adviser to be cash-flow positive “is obviously very important in your first year,” he notes.

“Student debt, as we all know, is a major problem in the U.S.,” Bernstein says. “If we, as employers, can put together a program for the right people with measurable metrics to help them, I am all for it. I think that it forces debt reduction rather than simply spending it.”

“I can see the potential appeal for RIAs being a part of the solution to a growing challenge,” Pare says.